I’m so pleased to present my good friend Lorenda Christensen, a fellow “Firebird…” which is our super cool name for the 2012 RWA Golden Heart finalists. Lorenda WON the Golden Heart in paranormal romance, and when you read her dragon-themed DRACIM series, you’ll see why! I loved NEVER DEAL WITH DRAGONS, and today is release day for DANCING WITH DRAGONS. Check it out! 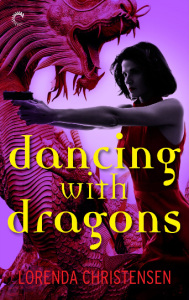 If Carol Jenski knows anything, it’s fashion—and it’s not in fashion to consort with dragons, even though they’ve coexisted with humans since World War III. Still, she would never have agreed to take part in a plot against them. Now a dragon lord has called for her head, her boyfriend is MIA and she’s been abandoned in a foreign country.
Only reporter Daniel Wallent is on Carol’s side…sort of. He offers his assistance if she helps him investigate his latest story. He’ll need Carol’s language skills to…